The Future of Law Conference 2017: Charting the Converging Paths of Law and Technology

Jointly organised by the Centre for Cross-Border Commercial Law in Asia at the Singapore Management University (SMU) School of Law and Osborne Clarke, the inaugural Future of Law Conference that took place from 26 to 27 October 2017 brought together leading academics and practitioners from around the world to tackle issues at the intersection of law and technology. This article provides but a snippet of the insights discussed at the conference.

The Relationship Between Humans & Artificial Intelligence

In his opening keynote speech, Professor Ian Kerr (University of Ottawa) spoke about the ethical and legal concerns surrounding delegating previously exclusively-human decisions to machines. Given that we are only at the stage of artificial narrow intelligence (ANI) at the moment, the concern is less about a dystopian future where robots may potentially overthrow humans and more about how we can manage the relationship between artificial intelligence (AI) and humans. As an increase in machine autonomy correlates with a decrease in human control, it is crucial to establish safeguards to deal with a situation where a machine demonstrates emergent behaviour.

As we transited into the panel discussion on AI and the law, Mr Koh Chia Ling (Managing Director, Osborne Clarke Queen Street) shared that, in his view, there is nothing that AI should not do. However, any system that tries to mimic a lawyer should be regulated. Responding to a question on the role of governments and regulators, Ms Jacqueline Poh (Chief Executive, GovTech Singapore) expressed the concern that AI that is trained to produce commercial benefit may engage in behaviour that is not socially acceptable, such as expounding fake news or showing violent images, in order to get more attention in the online space. Given the potential of AI to shape the values of society undesirably, it was incumbent on policymakers to step in when necessary.

The Blockchain of the Law

In the plenary session on the implications of blockchains for commercial law, Dr Chris Reed (Queen Mary University of London) argued that, for blockchains to find wider application in the legal industry, some form of “legal impurities” had to be introduced to empower blockchains to tackle the fuzziness and unique requirements of the law. However, features such as a means of manually altering the ledger have to be introduced without fundamentally undermining what blockchains were meant to do. This would require technologists to work with lawyers in devising an industry-sensitive implementation of the blockchain.

Building on Dr Reed’s arguments, Dr Miriam Goldby (Queen Mary University of London) and Professor Jens Krebs (University of Portsmouth) provided a practical view of how blockchains were being applied to develop electronic bills of ladings and the challenges that have arisen. Professor Kelvin Low (SMU) followed up with a deep technical dive into how the technology works, before exploring the extent it conforms with legal conceptions of “property”.

Professor Roger Brownsword’s (University College London) concluding keynote address provided the conference with a historically and philosophically-grounded exploration of the relationship between regulation and technology (specifically, machine learning). Contextualising machine learning within the range of emergent technologies the law has had to deal with over the years, Professor Brownsword highlighted three key imperatives regulators have always had to balance with such emergent technologies:

Professor Brownsword stressed that, although the legal treatment of different technologies and across different jurisdictions would naturally differ, there existed universal “red lines” which technologies must not be allowed to cross. The “essential preconditions of human existence” must always be protected. 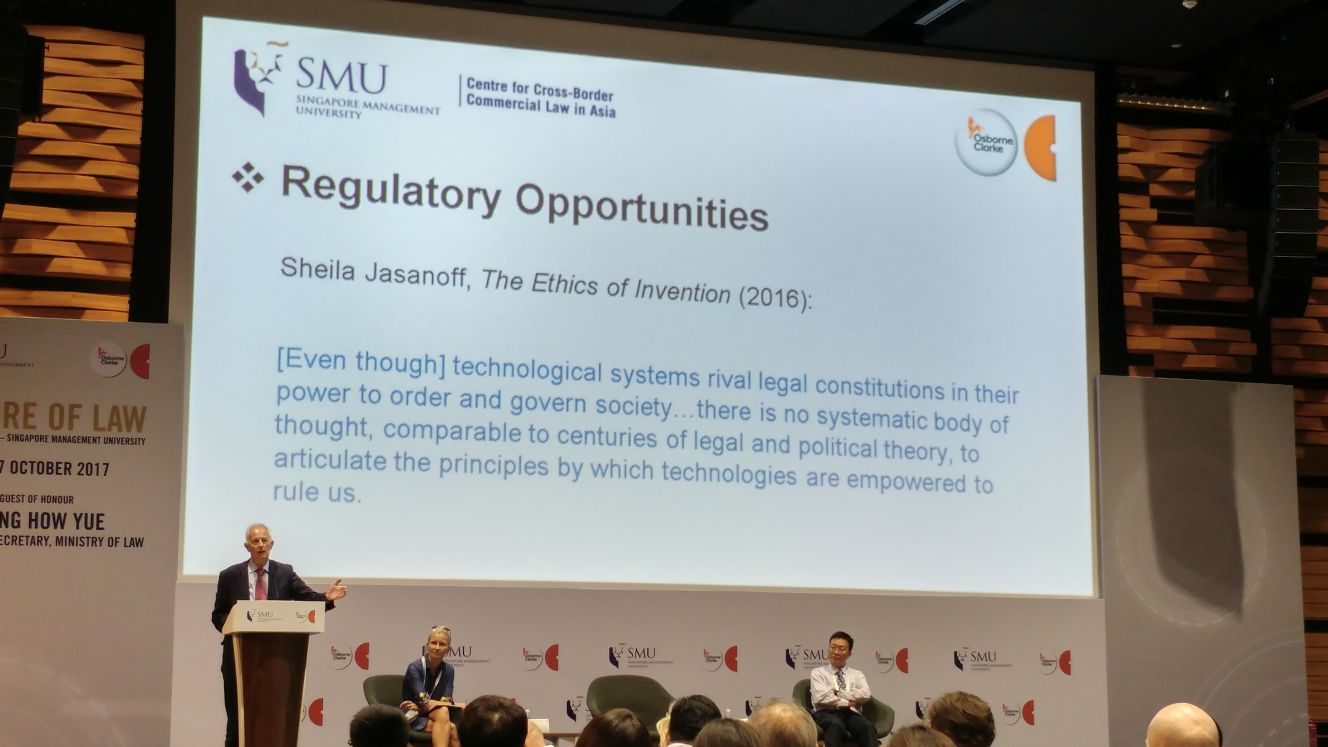 The session’s commentator, Professor Daniel Seng (National University of Singapore) then treated the conference to a fascinating insider’s look at how artificial intelligence works – bits of code were referenced in the process.

The parallel breakout sessions which continued up till Day 2 provided a refreshing format that enabled delegates to delve deeper into specific areas of law and technology they were most interested in. Many pertinent topics were discussed, including the following:

There were many more questions and insights raised during the conference that this short event write-up cannot hope to do justice to. Nonetheless, the reader may have one specific question in mind: how is the legal fraternity to respond?

Noting how AI was seen by some in the profession as a serious threat, Professor Goh Yihan (Dean, SMU School of Law) called upon lawyers to “be brave” in embracing technology and its impact on the law. To take advantage of the impending changes and recognise opportunities therein, it is instrumental to first understand these new technologies – which was precisely the objective of the conference.

In his opening speech, Guest-of-Honour Mr Ng How Yue also (Permanent Secretary, Ministry of Law) shared that the Ministry of Law is taking steps on three levels that aim to help law firms and lawyers catch up with technology, respond to disruption, and reap its benefits:

Mr Ng wrapped up his speech with a suggestion: “master your core knowledge; be attentive to industry needs; stay curious about adjacent fields; and most of all, understand that being human is a strength, not a weakness”.

Indeed, from now till the next iteration of the Future of Law Conference, it is incumbent on us to collectively re-imagine how we can navigate the relationship between technology and the law.

The writers would like to thank SMU and Osborne Clarke for putting together one of Asia’s first and only law and technology conferences as well as for giving us the opportunity to attend and cover the event.

* This blog entry may be cited as Amelia Chew & Jerrold Soh, “The Future of Law Conference 2017: Charting the Converging Paths of Law and Technology” (6 Nov 2017) (http://www.singaporelawblog.sg/blog/article/future-of-law-conference-2017)

** A PDF version of this entry may be downloaded here